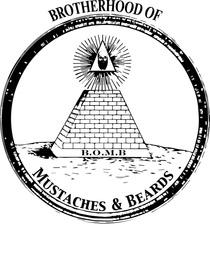 B.O.M.B. (Brotherhood Of Mustaches & Beards) is a social/facial hair club that was founded in 2011 and became a voting member of the WBMA- World Beard and Moustache Association in 2014. We started out as a group of like minded individuals that were proud of our facial hair but sick of the stereotypes and pre-conceived notions the general public had towards it. We set out to change that image by getting active in our local communities. We figured if we got out in force and in the public eye, we may sway a few opinions......and it seems to be working!

We have participated in many charitable ventures and/or volunteered our time for many different causes. We have raised funds for the Miami Children's Hospital, the Miami Rescue Mission, Autism Speaks, and the Quantum House just to name a few. We have raced a mustachioed bed in the Coconut Grove Bed Races for the past 3 years and have won crowd favorite each time. Additionally, we've volunteered at the Ale for Anglers event, benefitting the Snook and Gamefish Foundation. We have also hosted toy drives during the holidays and we are currently setting up a volunteer roadside clean up project with the adopt a highway program in Broward county.

We also host an annual Beard & Mustache competition that brings people in from all around the country which always supports a local charity. As a group, we also travel the country to various beard and mustache competitions put on by other clubs and help raise funds for charities in their respective cities. We have won awards and placed in so many competitions, it would be a very long list to compile. However, we do have 3 members that hold National Champion titles. Jon Rice is the 2011 National Full Beard Freestyle Champion, David Perry is the 2012 National Amish Beard Champion, and Brian "Damaged" Powell is the 2013 National Goatee Champion.
© 2011-2015 B.O.M.B. (Brotherhood Of Mustaches & Beards), All rights Reserved, All logos exclusively owned.               Contact Us